The ﻿Ann Kiley Center ﻿is a State-operated residential developmental center currently serving 195 people with developmental disabilities who have severe medical and/or behavioral needs. It is located approximately forty (40) miles north of Chicago in Waukegan, Illinois.  The 37 acre facility is in a mature neighborhood setting one mile from downtown Waukegan.  It is close to businesses, schools, churches, parks and other community resources.

Services provided by the center include:
History of Ann Kiley Center
(Condensed and adapted from The Herald Newspaper, Wednesday, August 21, 1974 edition)

Originally known as the Waukegan Development Center, the Center was scheduled to open on February 4, 1975 on 35 acres, containing 48 four bedroom homes, along with a pool, recreational facilities, coffee shop and an adjacent park.  Each home contains four bedrooms, 2 bathrooms, a kitchen with a refrigerator and stove and adjoining dining room, living room, and family room, a utility room with a washer and dryer and an outdoor patio.  The homes are air conditioned.  The center was set up to accommodate 384 people from the age of 6 and up.  There were 5 school buildings where children and young adults could receive formal training.

The Superintendent of the Waukegan Development Center was Mr. Patrick Saunders.  Per Mr. Saunders: “Historically, the handicapped individual was conceived as best being treated in a facility out in the country with spacious grounds and fresh air. Many were self-sufficient communities isolated in rural areas.  In 1970 the governor convened a group of professionals, businessmen and parents of mentally retarded people to devise a program content….The mentally retarded, the group said, has the same needs of any of us and therefore the environment should be comparable to what their peers have in the community.  The charge then was to create a normal environment….From this environment, the residents’ experience extends to the whole community…..The purpose of our existence is to work with a child as rapidly as we can and return him to a more normal, less structured, less supervised home in the community…A major part of the program will be teaching self-help and self-survival skills in the home.”

“In about 1969, Illinois appropriated money to create seven new residential centers in the metropolitan Chicago area with no more than 400 beds each… Each center was to serve a population area of one million..” per Mr. Saunders.  “One of the sites selected was Waukegan, the facility there being designated to serve all of Lake County and the two northern tiers of Cook County.”

Clearly, the Ann Kiley Center was created with the purpose of helping the severely mentally and physically handicapped individual to function at their fullest potential in as home like a setting as is possible.  When you enter the Administration Building, one of the first things you will see is the Center’s mission statement:
“Supporting People to Attain Their Wants, Needs, and Dreams” 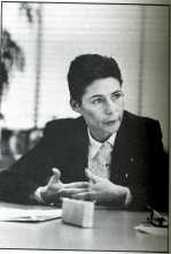 Ann M. Kiley Photo by Randy Squires
Ann M.  Kiley
When the facility opened its doors on April 4, 1975, the facility was originally known as the Waukegan Developmental Center.   In 1990, the facility was proudly rededicated as the Ann M. Kiley Developmental Center.  At the time of her death in 1990, Ms. Kiley had been the longest serving director in the history of the Illinois Department of Mental Health & Developmental Disabilities.  Among her many achievements, she was the first woman in the United States to direct a cabinet level mental health agency.

During the four years Ann Kiley directed the Department, her name became synonymous with increased emphasis on the quality of treatment and habilitation services.  Her tenure marked significant progress in increased staffing levels, improved appearance and physical condition of facilities, and the promotion of services designed to enhance the growth, independence and self-sufficiency of persons with intellectual disabilities as well as persons with mental illness.

As an example of her philosophy, Ms. Kiley once wrote:

Let us therefore not be bound too tightly by conventional strategies and outmoded thinking.  Simply because it’s always been done that way, doesn’t mean that’s the best way.  I am willing to listen to anyone who sees a better way to accomplish our goals and I shall be stressing to top management that they should similarly strive to encourage creativity among their own staff and be willing to try out innovative suggestions.
Read more about Ann M. Kiley